THE DEAD DAISIES INSPIRE WITH SHORT FILM “LIKE NO OTHER”

DEE SNIDER 'For The Love Of Metal' Album Review

Dee Snider sounds amazing! For a man doing this for over 40 years, his voice still sounds great. He delivers vocally throughout the entire album. His lyrics are filled with passion and he sings it like he means it. While being very recognizable, for a singer to continue to deliver believable passion is great to hear this far into their career. I've seen several interviews with him recently and he seems very excited and into this album. "For the Love of Metal" is everything th

CHRISTILLOW 'Standing In The Rain' now available on yellow vinyl

Formed in Philadelphia, Pennsylvania 1988 by members Michael James Christillow (Vocals), Kenne Mettler (Guitar), Jessy Marks (Bass), Rod Taken (Drums), and David Guistwhite (Keyboards). CHRISTILLOW would quickly generate a buzz as they began playing the circuit up and down the East coast. Sharing bills with bands such as Loudness, Trixter, and a number of other touring bands of the time, CHRISTILLOW would prove to audiences that their brand of metallic melodic hard rock with 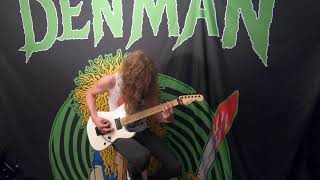 Its another 'Riff of the Week' and Dakota is playing some Priest from 1990. This is, Painkiller!! Denman Facebook Page #DakotaDenman #Denman #JUDASPRIEST #HAIRBANDHEAVENROCKS #RiffoftheWeek #GUITARREVOLUTION

singer/guitarist Jimmy Hansen who was at first apprehensive about doing anything with the material; stating, “that was then, this is now, life has moved on” As discouraging as this was, Jimmy still said “I will send you what have and you can do what you want with it”. From there we began to work on getting this best material we could gather together for this project having little to no help. What we received was a disc of including the 5-tracks from the ‘Carry the Torch’ EP

Canadian thrashers INFRARED release video for 'All in Favour'

If Infrared sound like classic thrash metal, that’s because they are! And rightfully so since they were making music as teenagers in the mid to late 80s back when the Big 4 (Metallica, Megadeth, Slayer, Anthrax) were just becoming famous. They literally lived and breathed that scene as it was happening and garnered national attention in Canada through their song and video for Thoughts Caught (in Between). Then....life happened and members took different paths and the music

FALLEN ANGELS Unleash New Video 'The Force In The Mind'

Fallen Angels spent the entire year of 2017 in the writing and composing their new release and at the end of that year, they retreated to the recording studio to complete their first full album. Within the walls of Hypnoise Recording Studio and assisted by the talented Filippo Galvanelli, they succeeded in perfecting their songs and ideas. Even Priest Knows represents the bands desire to revive the spirit and atmosphere of the 80’s. It’s an album of 10 tracks that passes from

Dead Daniels release offcial video for "Karma'. Dead Daniels band was formed in 2009 and members are Tommy Wheeler (guitar, vocals), J.C. Smith (bass) and Standa Šmeral (drums). In 2010, they released their first EP "Jack lives here". In 2013 came under the auspices of Supraphon company the official single "Show", which also succeeded in the Radio Beat competition and the Floridian Classic rock radio. In 2015, finally comes Supraphon debut album "Tomahowgh" which was produced

The Local Band made the announcement this week about Archie Cruz leaving the band to spend time working on his own music. The band wishes him the best, and has stated that their new full time bassist is Samy Elbanna from the Finnish thrash metal band, Lost Society. #THELOCALBAND #ARCHIECRUZ #HAIRBANDHEAVENROCKS
1
2345