ACCEPT Touring the US for the First Time in 10 Years

The Struts have released a brand new track ‘Fire (Part 1)’, which also features on their forthcoming album YOUNG&DANGEROUS. You can hear the track below. The much-anticipated follow-up to 2016’s Everybody Wants, YOUNG&DANGEROUS also includes their recent releases ‘Bulletproof Baby’ and ‘Primadonna Like Me’, in addition to their Kesha collaboration ‘Body Talks’. The album is due for release on 26 October. Since the release of Everybody Wants, The Struts have been touring non- 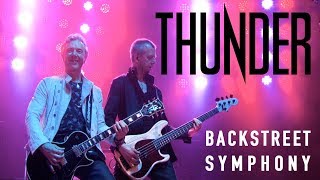 THUNDER RELEASE LIVE VIDEO OF “BACKSTREET SYMPHONY”. Friday 16 February 2018 sees the release of a brand new live video for the classic track ‘Backstreet Symphony’ from Thunder. Taken from their forthcoming live release ‘Stage’, the song will be available as a stream and instant grat as part of the iTunes preorder. ► Spotify: http://smarturl.it/Thunder_BackSym_Spo ► iTunes: http://smarturl.it/Thunder_Stage_iTunes ‘Stage’ features hits from right across the band’s career and i